Methods: Patients with CH for PAS (n=140) was divided into two groups: ureter dissection (+) vs. (-). We compared the perinatal and surgical outcomes between the two groups.

Conclusion: Ureteric dissection did not reduce bladder/ureter injury in CH for PAS.

Placenta accreta spectrum (PAS), refers to a spectrum of abnormal pathological adherence of the placenta, including placenta increta, placenta accreta, and placenta percreta. PAS is associated with a major morbidity still the main risk is the massive obstetric hemorrhage, which leads to secondary complications including coagulopathy, multi-system organ failure, and death. However, maternal morbidity and mortality is reduced when care is provided in centers of excellence (COE), the main step in these centers is a directed care plan and multidisciplinary team including all concerned specialties, and surgical expertise capable of managing the full spectrum of accrete complexity [1].

Caesarean hysterectomy is the gold standard treatment for PAS - however, conservative treatment may be considered in young needing future pregnancy provided there is close follow-up and monitoring - There are many complications for caesarean hysterectomy one of them leads to increase operative time, prolonged postoperative recovery, and sepsis: is urological injury which is mainly bladder injury. In a systematic review of surgical techniques used for placenta accreta, the overall rate urinary tract injury at peripartum hysterectomy was 29%, most of them involving the urinary bladder 78%, whereas 17% involve the ureter [1].

Modification of surgical approaches reduced urinary tract injuries compared with standard hysterectomy [1]. reducing the risk of urinary tract injury during caesarean hysterectomy Intraoperative measures like proper surgical technique, gentle and proper exposure of structures, blind clamping of the blood vessels is forbidden, dissection with routinely ureteric direct visualization, The careful dissection and mobilization of the bladder, extreme cautious during use of the electrocautery [2], a mandatory step to prevent injury to the ureter is to proper identification during its path through the pelvic inlet and the regions where it is more susceptible to be injured [3].

This cohort prospective study was carried out in Ain Shams University Maternity Hospital, Cairo, Egypt during the period starting from October 2018 till Oct 2020. The Ethical Committee of The Faculty of Medicine Ain-Shams University approved the study.

The present prospective cohort study assessed the safety and efficacy of early ureteric visualization in decreasing the incidence of urologic injuries in caesarean hysterectomy for placenta accreta in comparison with the standard approach. The study included patients with abnormally invasive placenta diagnosed and confirmed and revised by senior sonographer and repeated caesarean section and excluded morbidly obese patient (BMI over 35). Severely anemic patients (Hb less than 8 mg/dl), previous ureteric injury or previous uro-gynecological surgery and patients with bleeding disorders.

One hundred and sixty patients were diagnosed as placenta accreta, they were enrolled to the study, twenty of them were excluded from the study, and eighteen of them were managed conservatively so hysterectomy was not done, while the remaining two had thrombocytopenia. The remaining 140 cases were equally divided into two groups Group A cesarean hysterectomy was done using the classical approach while, Group B consisted cesarean hysterectomy with ureteric dissection before uterine artery clamping.

The pregnant females were recruited form women attending labor ward to undergo cesarean section for placenta accreta and ended with cesarean hysterectomy. They have been diagnosed by 2D and power Doppler. Sonographic evaluation was done and confirmed by senior sonographer in our accreta team. Patients were divided randomly into two groups as follows:

The two groups were carefully studied as regards to incidence of urologic injuries, the intraoperative timing, time needed for dissection and complications.

After taking informed written consent about possible complications, all women recruited in the study were subjected to:

All patients done by the same surgical team

In group A: The standard approach for caesarean hysterectomy (dissection or visualization is not performed). Midline abdominal incision, Hysterotomy: classic midline incision of the uterus [above upper margin of the placenta], delivery of the fetus in presence of a well-trained neonatology team. Avoid traction of the placenta, no ecbolics given, and quick closure of the uterus [leaving placenta in situ] in one layer. Clamping and cutting the round ligament, clamping and cutting the ovarian ligament with preservation of the ovaries, Lateral dissection of the uterus from the pelvic side wall, followed by very careful sharp bladder dissection. Finally clamping of the uterine vessels is done below the level of the placenta with or without complete removal of the cervix depending on degree of placental adherence. Closure of the uterine stump is performed, repair of urological injuries if present, internal artery ligation if needed followed by careful hemostasis, then closure of the abdomen is performed after leaving two wide bore drains.

In group B: As in group A but with ureteric dissection. Careful dissection of the posterior leaflet of the broad ligament until the ureter is properly visualized, careful dissection and exposure of both ureters and proper identification of the iliac vessels so as to facilitate the ligation of anterior division of internal iliac artery if needed and to avoid any major vascular injury. Following ureteric dissection is performed lateral dissection of the uterus is completed from the pelvic side wall, followed by very careful sharp bladder dissection below level of the cervix. Finally clamping of the uterine vessels is done and continue as in group A.

Assessment of blood loss in both groups by counting towels, every single soaked towel 150 cc, suction machine set at the end of operation by anesthesia team to guard against bias and (NB) liquor volume subtracted from suction machine just before uterine incision till frank blood in the field.

160 patients were planned to be recruited, 80 patients for each group, during the on-going research 20 were excluded 18 of them due to placental separation and other two due to bleeding tendency before surgery as shown in Fig. 1., So percentage of placental delivery 11.25 and the rest of patients under went hysterectomy 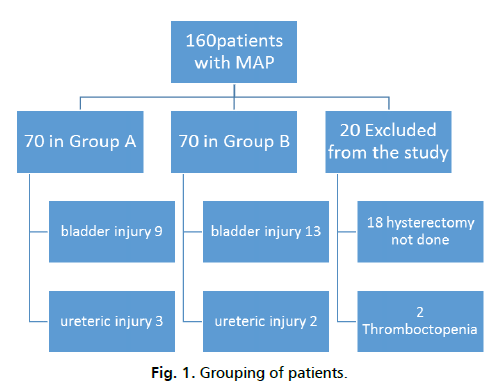 Tab. 1. Shows the demographic characteristics, parity & previous miscarriages in both groups, Tab. 2. shows the perioperative data in both groups, while Tab. 3. Postoperative drop in hemoglobin and volume of blood in drain in both study groups.

Tab. 3. Postoperative drop in hemoglobin and volume of blood in drain in both study groups.

Tab. 4. Pattern in packed RBCS transfusion in both groups.

In planned caesarean hysterectomy most patients had total hysterectomy due to involvement of cervix by morbid adherent placenta and Internal iliac artery ligation were 14 in group A and in group 9 B, and was done to control massive pelvic hemorrhage (not done routinely) and following analysis for subgroup with internal iliac ligation in both groups (details in urological injuries in Tab. 5-7.), as shown in Tab. 8. in patient who no urological injuries no significant difference between the two groups as regard operative time and blood loss.

The current study showed that there was no significant difference between the two groups as regards demographic characteristics, previous deliveries, previous miscarriages, indications for hysterectomies, perioperative data (operative time, perioperative blood loss, number of packed RBCs and plasma units transferred), length of hospital stay, volume of blood loss in drains, drop in hemoglobin level and complications as wound complications, ICU admissions, bowel injury, bladder injury and ureteric injury although the latter complication was more in the group which didn't have ureteric dissection (group A) which may point out to the importance of meticulous ureteric identification taking into account that one of the two injuries in the ureteric dissection group (group B) was unavoidable as the case was placenta percreta invading both the bladder and the ureter. Glimour, et al. [4] did a literature review and agreed with the current study in suggesting that the most effective method for prevention of urological injuries is proper intraoperative identification of both the bladder and the ureters, especially that Jauniaux, et al. [5] in their systemic review found that the overall rate of urinary tract injuries in peripartum hysterectomies performed for placenta accreta was 29%, which is higher than the rate of 4.8% found for hysterectomies performed for gynecological indications [6]; therefore, modifications in the surgical technique may contribute in reducing the risk of such injuries, particularly in those with risk factors associated with ureteric injury as previous pelvic surgery, pelvic adhesions, obesity, large pelvic masses and intraoperative bleeding [7]. The urgency in dealing with the latter complication leaves the surgeon little time to dissect the bladder from the uterus. Late discovery is also one of the problems of ureteric injuries as Jacob, et al. [7] found in their study that 70% of cases were diagnosed after discharge, 50% of cases had a complicated course and 45% had unfavorable legal outcomes suggesting intraoperative ureteral identification in high-risk cases.

Other methods of ureter identification include pre-operative ureteric stenting, which has the advantage of avoiding denervation and devascularization associated with extensive ureterolysis [8]; however, this approach may not be feasible in some cases of placenta percreta particularly if both the bladder and the ureter are invaded as the case found in group B. The current study has the advantages of being done in a tertiary dedicated center and recruiting relatively large number of cases in relation to the frequency of such condition; however, its main limitation is the lack of proper randomization.

Ureteric dissection before cesarean hysterectomy for placenta accreta spectrun didn’t show merit. It was not associated with statistically significant difference as compared to classical hysterectomy in decreasing the risk of intraoperative urological injuries Usually we just expose the ureter ensuring its safety before uterine artery clamping in some cases we had to dissect it in ureteric canal for selective ligation of uterine artery, in severe pelvic hemorrhage in morbid adherent placenta with urge of surgeon to control it blind clamping of uterine artery compromise the ureter so visualization of the ureter ensures its safety so no need to ureter dissection. Further randomized controlled trials are needed to support or refute such finding.

Authors report that they neither have conflict of interest nor received financial support for this work.


Copyright:This is an open access article distributed under the terms of the Creative Commons Attribution License, which permits unrestricted use, distribution, and reproduction in any medium, provided the original work is properly cited.